――A link between Eastern and Western markets

Nomura is a leading financial services group with an integrated global network of 28,000 people spanning over 30 countries. Deeply rooted in Asia, since 1925, the company serves a wide range of clients, from individuals to governments. It is a crucial gateway for money flows into, within and out of Asia, connecting markets East and West.

The role of his team is to provide detailed, in-depth analysis and for- ward-looking insights to clients. McCafferty says the team turns to the Nikkei Asia in its research, noting, “If you are looking for the best coverage on Asian markets and economies, then it’s the Nikkei Asia.”

“Looking at international papers, they just don’t have the depth of information about the Asia-specific materials that we need,” he continues. In order to provide accurate reports, he says his team needs a dedicated publication with a home in Asia and a deep understanding of supply chains. From that perspective, McCafferty says, the Nikkei Asia is “the most credible one.”

――Changing views of Japan and APAC

Having worked in and closely watched Asia for a decade, McCafferty notes that the way investors see the dynamics of the regional economy is changing. “In the past, there were two visions when people looked at APAC: One was Japan, and another was Asia ex-Japan.” He explains that this was because Japan stood out as an advanced economy amid a mix of emerging nations at various stages of development.

Times have changed. More Asian countries are making their marks on the world economy. “A lot of the investors who previously thought of Japan and ex-Japan as two different asset classes are getting to view them together,” Mc- Cafferty says.

This does not mean Japan’s relevance has decreased. On the contrary, he says understanding Japan’s business structure and development is becoming ever more essential.“We think that, ultimately, Japan can be used as a benchmark and a guideline to form how industries will develop in other Asian countries.”

Therefore, McCafferty says his team endeavors to help investors see Japan in the context of Asia as a whole, and to bridge Japan and Asia ex-Japan, which have long been disconnected in investors’ eyes. Integrating the two is not only a challenge for Nomura but for the overall financial industry, in his view.

Yet, even though accurate information on Japan is vital, he thinks the international media is not providing enough of it. If anything, he says, Western news organizations seem to be shifting away from Japan.

“If you think about Japan in the 1980s, when the nation was 40% of the world market capitalization, there was so much Japan coverage.” However, once the nation entered a period now known as the lost decades, the media began turning to hotter stories. During “those lost decades, less and less resources were dedicated to Japan,” he recalls, noting how Western media scaled down their operations in the country. The Nikkei Asia has filled the gap, McCafferty says, providing “the best source” of insights on how Japan and the rest of Asia fit together.

“As for Japan-specific information, again, the Nikkei Asia is the strongest,” McCafferty says. His team finds the publication’s extensive coverage through local eyes particularly helpful.

While the team members may get headlines from other media outlets, and they receive a steady stream of news releases and other information, they look to the Nikkei Asia for depth. “Details are what we get from the Nikkei Asia that we don’t get elsewhere.”

Nikkei Asian Review was renamed Nikkei Asia on September 30th, 2020. Quotes have been updated to reflect this. 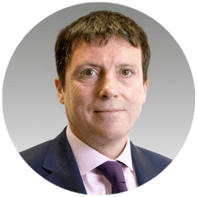 Jim McCafferty is joint head of APAC equity research at Nomura, overseeing a team of analysts covering the region. He joined the company in July 2015 as head of equity research for Asia ex-Japan after five years with RBS/CIMB in Hong Kong, where he led Asia-Pacific research. McCafferty obtained a bachelor's degree with honors in economics from Heriot-Watt University and a master's in political economy of East Asia from the University of Sheffield.

Nikkei Inc. No reproduction without permission.